When Baseball and Vocation Meet 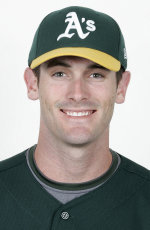 In honor of our Watermark A’s vs Mariners baseball outing tomorrow, check out this expose on former A’s baseball prospect, Grant Desme, who was one of the Oakland A’s brightest rising stars when he left baseball to enter the priesthood. We actually wrote a post about it when it first happened almost three years ago. At the time, I made the following, now-dated comparison: “A prospect of Grant Desme’s caliber walking away is sort of the equivalent of an up-and-coming actor retiring from acting – like Blake Lively becoming a nun.”

It’s a bit of a long read, but there is lots of good stuff in it. Still, here is a cliff notes version to whet your appetite: 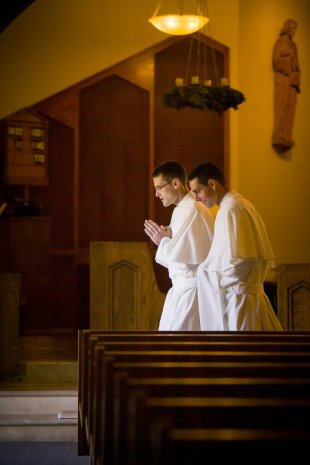 On the afternoon Grant Desme retired from baseball, he was at peace. The world in which he had immersed himself was shocked and dumbfounded, of course, that a strapping 23-year-old center fielder with power, speed, smarts and just about everything baseball teams want in a player would quit. Sports is a place of great myopia, insular thinking and exaggerated accomplishment that conflates excellence and holiness. In baseball, God is the home run. And Desme knew that God well.

People in the game scrambled to understand why Desme would give up the riches and the platform baseball affords to spread the word of God. The decision wasn’t met with derision as much as wonderment. Athletes leave when their talents or bodies or something tangible betrays them. Desme left ascendant.

He was playing against the best of the best in the minor leagues. Stephen Strasburg was his teammate with the Phoenix Desert Dogs. Desme faced Buster Posey, Jason Heyward, Giancarlo Stanton, Starlin Castro, Freddie Freeman, Matt Harrison, Craig Kimbrel, all future stars. For two weeks, none was as good as Grant Desme. Nobody on the planet was. Desme went on a run still legendary among baseball personnel.

“It was nuts. It was 10 games of just – I couldn’t do anything wrong. I remember that at-bat where it stopped. I stepped in the box at Mesa. First at-bat. I knew it was gone. It’s just a feeling. That’s why, in hindsight, I know it was God working. That was a special grace. That’s what I had yearned for. There’s nothing better I could’ve done that season. That was a big sign for me. OK. What’s going on here? I should be happy about this. But I wasn’t. There was something more. God was just tugging at my heart. That’s what religious life is. God calls us.”

He believed in the Catholic Church, in its virtues and its mission. He couldn’t explain away the child-molestation scandals that devastated the church’s reputation, and that of the Norbertines, who for decades declined to report serial abuser Brendan Smyth, the most notorious pedophile in Ireland. He recognized that as the country’s opinion on homosexuality and gay marriage evolved, the church would be prone to criticism about an unwillingness to adapt. He would need to own religion when so much of the world snarked at it. The Catholic Church in which Grant Desme believes stands for good. God needs priests to resurrect the church’s standing and lead people to heaven, to counsel the troubled and bring peace to the sick, to understand the supernatural for those who can’t.

The first phone call went to Billy Beane. It was less than a month before Grant Desme needed to report to spring training, and he was about to call one of the most powerful men in the game to which he dedicated his life – the person Brad Pitt would portray in the “Moneyball” movie – and tell him he was quitting to spend the next decade becoming a priest. Beane, too, was thrilled for him. Taken aback, certainly. “I grew up in a Catholic family, so what he was pursuing wasn’t completely foreign to me,” Beane says. “I spent half the conversation congratulating him.” Beane didn’t tell him that he would have come to major league camp for the first time and start the season in Double-A, maybe Triple-A with a big spring, that he was going to be a major leaguer at some point or another in 2010 and beyond. He said, very simply, “I look forward to hearing your first homily.” And that was the last they spoke.

Two years here have scrubbed the last vestiges of elite athlete from Frater Matthew. He has lost weight, 20 pounds, maybe more. He swapped his contact lenses for rectangular glasses because contacts dry out during prayer. His protein comes from instant eggs donated by local grocery stores, not the shakes he guzzled to sustain muscle. He pretty much looks like a priest: a little bit of nerd and a lot of wisdom, quick with a kind word and even quicker to glorify God.

He leans forward and starts to tell a story about a girl. “She was pretty much everything I ever thought I wanted,” he says. “I had to make a choice. That was the person I had imagined myself marrying.” He met her during his discernment, when he struggled to understand why God called him now. He wanted a sign. She was it. “I really wanted to be married,” he says. “To come to terms with living a celibate life was where it really was like, ‘OK, do I want to do this?’ And I needed to realize it’s not a repression of these natural desires that are good. We have to learn to sublimate them into God on a supernatural level. We give them to God.” On the night Grant Desme broke up with the perfect girl, he wasn’t at peace. And he may never be.

Father Ambrose suggested he spend extra time in his cell praying. The loneliness of baseball – one man standing inside a rectangular box, his mind racing, his adrenal glands churning, him and another man 60 feet, 6 inches away, nothing but muscle memory to save him from embarrassment – prepared him for these moments of solitude. He found himself there all those late nights after ballgames, just thinking about life without the one thing to which he dedicated his life. He didn’t have a degree, didn’t get good grades, didn’t do anything to distinguish himself off the baseball field. This was his life. It had to be.